The pair, aged 20 and 21 who have not been named yet, is thought to have made that error and snorted the drug.

Sold as a “white powder”, the drug has traditionally come from south-east Asia and sold in places like Australia.

“It’s a really difficult job for someone who’s new or naive to opiates to pick [between] heroin and cocaine.

“The main risk with white heroin is people who are naive users is that it’s a light, white-coloured powder,” says Prof John Fitzgerald, of the University of Melbourne.

He has studied the illegal drug trade in Australia for many years.

“It can be confused with other white and light-coloured powders.”

He adds: “For people who don’t usually use strong psychoactive drugs, the general advice would be that if you’re in an unfamiliar place, don’t do it.”

Get help and information about drugs at BBC Advice.

He says that even those selling the drug may not always be completely sure what substance they are dealing in.

“It’s very possible that you get people who are dealing in quantities or purities that they haven’t dealt with before and that accidents happen,” Prof Fitzgerald.

Rob van de Veen, a police spokesman in Amsterdam, says white heroin is “much more expensive” than cocaine, but the dealer “sold it for the same price [as cocaine] several times”.

“We think he doesn’t know what he is selling,” he says. 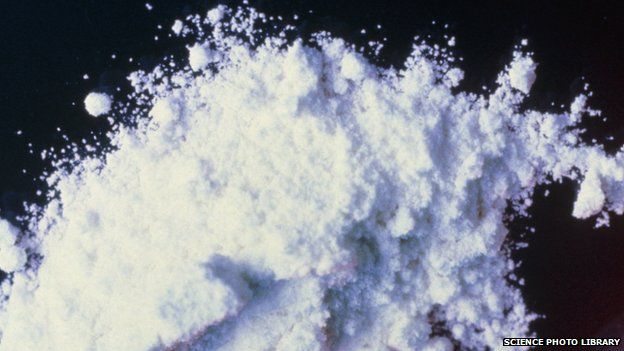 He says that in the past different types of heroin ended up in different markets.

While white heroin tends to be produced in south-east Asia and sold in the southern hemisphere, brown heroin originates in places like Afghanistan and typically makes its way to Europe.

“It’s much easier with brown heroin [to tell the difference] because it certainly looks brown and cocaine doesn’t come in a brown form,” says Prof Fitzgerald.

In recent years however, brown heroin has become more prevalent in Australia and according to Prof Fitzgerald, it is difficult to know whether more white heroin will come to Europe.

“The drug market is inherently unpredictable,” he says.

“Whilst there’s been a sharp distinction between the southern hemisphere and the northern hemisphere over decades… I wouldn’t be surprised if you start seeing a different mix of the different forms of heroin that are available.”

Because white heroin tends to be more soluble in water than brown heroin, users tend to inject the drug.

Prof Fitzgerald points out that this method of taking drugs comes with increased risks of certain side effects and problems.

“When you inject a drug you increase the risk of hepatitis and HIV transmission,” he says. “That is an additional risk to injecting heroin, especially white heroin.”

According to the drug advice service Talk To Frank, taking heroin can lead to comas and death. Injecting drugs can cause damage to veins and arteries and cause infections.

The service also says that people have died of cocaine overdoses and that the drug can cause cardiac problems, including heart attacks. It is also linked to depression and mental health problems.

In the UK both cocaine and heroin are a class A drugs, which means possession can result in up to seven years in prison and an unlimited fine.

The police have yet to release the names of the two men who died on Tuesday.